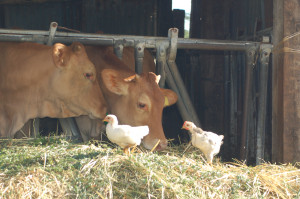 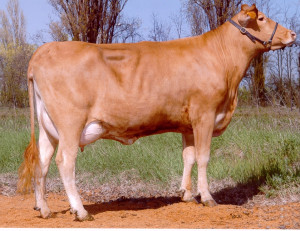 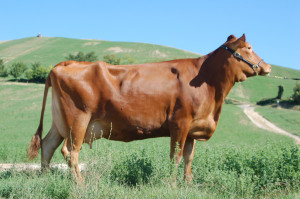 The Reggiana cattle, also known as the “red cow”,  is an old breed, first reported to be farmed in the areas of Parma and Reggio Emilia, Northern Italy,  by monks around year 1000. The farming area at those times probably included large territories of Northern and Central Italy: a red ox is traditionally present in the nativity renaissance paintings. The breed was presented at the Vienna Expo in 1873. Pedigree registration started in the fifties, with about 140.000 cows, and breed standards were published in 1953. In 1986 the national Herd-book was created. From early fifties the substitution process with Brown Alpine and Holstein cattle started; in 1970 the population dropped to 8,000 cows and in 1981 reached the minimum of 450 cows. From late ’80, linked to conservation activities including the production of a specific parmigiano reggiano cheese made with Reggiana milk, we observe a positive demographic trend. In particular, in 1991 a group of passionate breeders created a consortium (CVPAR: Consorzio Valorizzazione Prodotti Antica Razza Reggiana) to add value to the breed by producing a Parmigiano Reggiano cheese made with Reggiana milk, labeled “Parmigiano Reggiano delle Vacche Rosse”. Since its appearance on the market, this branded Reggiana Parmigiano Reggiano encountered good acceptance by consumers that were ready to pay progressively from 30 to almost 100% more with respect to generic Parmigiano Reggiano cheese. About 20,000 cheese wheels (35-40 kg) were produced in 2018. Following this renewed interest for the breed, the number of Reggiana cows has been progressively increasing to almost 4,000 heads in 2018. 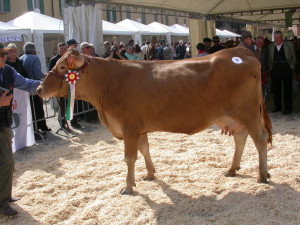