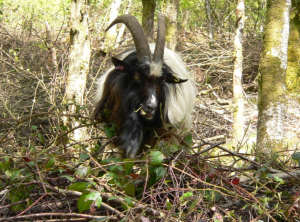 The Bagot is believed to be Britain’s oldest breed of goat with a documented ancestry. It is a small to medium sized goat with large curved horns. It is the UK’s only primitive goat breed to have developed in the English lowlands and has adapted to the challenges of this environment. As such, it is surprisingly tolerant of rain, and usually only seeks shelter in the heaviest downpour. Bagot goats are not selectively bred to improve their meat and milk yields and therefore currently have little commercial appeal. Instead their value is as an animal that has developed through natural selection for its ability to thrive on an extensive range in lowland Britain, with minimal human intervention for most of the year. They are increasingly being used in conservation grazing projects especially where clearance of invasive woodland and scrubland species is required. 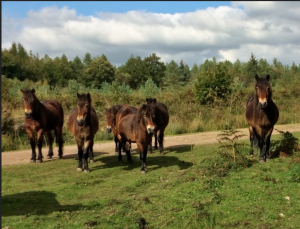 Exmoor ponies are one of the hardiest native UK breeds. They are versatile, intelligent animals with high aesthetic appeal. Historically, they were used by hill farmers for both riding and being put in harness for ploughing or driving. Today, they are often used for conservation and rewilding projects as they have many characteristics that make them well suited to extensive grazing situations, for example, mature non-breeding animals usually maintain condition well on poor forage. They are very tolerant of rain, snow and cold winds but they do need access to some form of shelter in adverse weather conditions. Unless deliberately trained, they are inclined to keep away from people and it can be difficult to get within 25 metres of an unhandled pony. 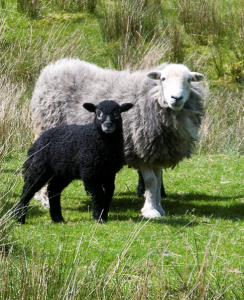 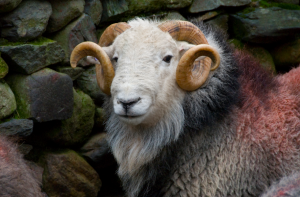 The name Herdwyck is recorded in the Lake District dating back to the sixth century. Genetic analysis shows that the Herdwick has remained isolated, little influenced by other breeds and retaining many characteristics of primitive wild sheep. The Herdwick Breeders’ Association was formed in 1916. The majority of Herdwick sheep (95%) are found in Cumbria within which is the Lake District National Park. Hollow kempy white fibres in the coat shed water keeping the sheep dry protecting them from the high rainfall. Selection processes have created an animal that is ideally suited to its environment and no other breed can live as long, rear strong lambs and survive on the high fells. Herdwicks have a strong female home range tendency and this natural instinct has become part of the management practice known as hefting. The Lake District World Heritage site strongly affirms ‘its unique landscape dominated by upland pastoral farming’ whose traditions make possible the farming of a challenging environment.

Herdwicks are a sturdy, strong boned sheep, the rams have a broad chest, noticeably thick-set legs and may have strong horns, (around 20% are polled).  The female sheep have no horns. Purebred Herdwick lambs are born black often with tips of white on their ears.  As they age, the heads and legs become white and the fleece assumes a colour ranging from a slatey blue-grey to a light grey.

Herdwick sheep are recognised for their hardiness and are used in other parts of the UK for Conservation grazing projects.

More info can be found at: www.herdwick-sheep.com 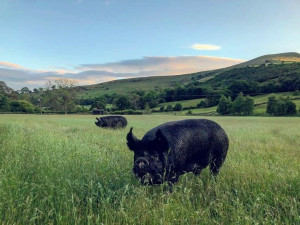 The Berkshire Breed has a rich history with a herdbook going back to 1885. The breed’s home is in the Thames Valley. It was bred at Windsor by King George V who was also patron of the breed society for many years. It may be that King George shared his enthusiasm for the breed with the Crown Prince of Japan during a state visit in the 1930’s. The breed is very popular in Japan where it is famed for its meat quality.

A medium sized pig with a black coat and six white points the Berkshire, in common with many other British native breeds, lost favour in the 1970’s when white breeds were commercialised for intensive production. The breed survived a near extinction crisis in 1975 with less than 130 sows and 6 active breeders. It has recovered and today there are more than 300 breeding sows in over 100 herds.

The Berkshire pig services a niche market for high quality native breed pork as well as contributing to cross breeding programmes for larger scale production. The breed is also in demand internationally with recent exports of semen to Belarus, Japan, Malaysia, Philippines and Thailand.

An in-situ conservation programme is managed by the British Pig Association (BPA) working with the Berkshire Breeders Club and an ex-situ genebanking programme is being undertaken by the BPA in partnership with Rare Breeds Survival Trust. 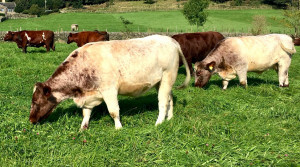 The Shorthorn breed of cattle has evolved over the last two centuries from cattle originating from Yorkshire and Durham in the North East of England. In the late 1700s, Charles and Robert Colling improved the breed using line breeding techniques. In 1822 Mr George Coates published the first Herd Book containing 710 bulls and 850 cows, thereby becoming the first pedigree herd book for cattle in the world.

Today the breed of Beef Shorthorn Cattle which are characteristically of red, white or roan colours, has grown in numbers from 7206 registered cattle in 2012 to 10506 in 2020.

Beef Shorthorns have responded well to the market for high quality and pasture fed beef in addition to being an excellent improving cross with commercial cattle. The cows are long lived, economic and calve easily with good milk to rear the calf. The steers have an excellent rate of gain, good feed conversion and increased marbling and tenderness. Traits recognised by the UK supermarket, Morrison’s who stock Beef Shorthorn meat as a premium brand.

Overall, the Shorthorn is an ideal breed for the production of a choice high quality beef with its suitability for extensive, sustainable and organic farming systems and its proven marbling and early finishing abilities. The importance of the Shorthorn breed in the development of other cattle breeds has been highly significant and Shorthorn genetics have been used worldwide in the development of over 40 different breeds.

The Oxford Sandy and Black Pig 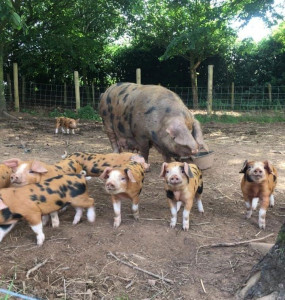 The Oxford Sandy & Black Pig or OSB, sometimes referred to as the “Plum Pudding Pig” is one of the oldest British pig breeds, having existed for some 250 years. They are believed to have developed in the county of Oxfordshire.

The OSB has reached crisis point at least twice in the past when numbers dropped so low that extinction was a real possibility. By the 1940’s, just two officially recognised boar licences were granted and the future of the breed was left to a few dedicated breeders.  In 1985, a Breed Society was formed (The Oxford Sandy and Black Pig Society) with 29 herds listed in the first herd book consisting of 15 boars and 62 sows. Transfer of herd book to the British Pig Association (BPA) in 2003 brought the benefits of increased publicity and the opportunity to compete in BPA recognised shows. In 2012 the OSB was recognised by the Rare Breeds Survival Trust (RBST) after DNA analysis proved beyond any doubt that the breed had not become extinct as some professed and was a breed in its’ own right.

Today, the picture is most encouraging with the rarest bloodlines slowly increasing and breed numbers indicating that the OSB is the second most popular British traditional breed.  At the last annual survey (2020), there were 142 boars and 558 sows. 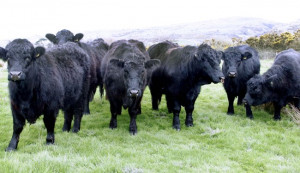 The Welsh Black breed of cattle is one of the oldest in Britain, having inhabited the hills of Wales since pre-Roman and pre-Christian times. The cattle were often used as currency, giving rise to the description “the black gold from the Welsh hills”.

The Welsh Black is only native breed of cattle of Wales. It has been moulded by the landscape of this beautiful, windswept country into a modern animal that thrives in the harshest of conditions. The old breeders refer to it as ‘Cot a gwasgod’ (Coat and Waistcoat), describing the long coarse hairs that protect the animal from the wind and the shorter, finer hairs underneath that protect it from the rain. Having inhabited the hills of Wales for such a long time, the Welsh Black evolved to serve every purpose possible, producing milk to be churned into butter and cheese, prime beef, and even sometimes used as a draught animal.

Welsh black cattle today are a truly versatile dual-purpose breed for both dairy and beef production, which are equally at home in rocky uplands or lush lowland pastures. 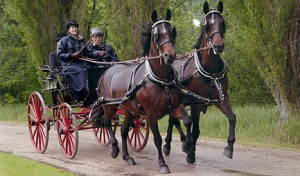 The Cleveland Bay horse emanates from the Cleveland area of North East England. It is England’s oldest breed of horse with a history that goes beyond a time when records were kept. It is an incredibly versatile horse that can turn its hoof to all disciplines, a legacy of its need to adapt through the ages to the changing face of civilisation. It evolved from a general-purpose work horse, to a coach horse, to an artillery horse in WWI and today is used in driving, dressage and show jumping, the latter two disciplines having horses produced to Olympic standards. Notably, Her Majesty the Queen owned a pure Cleveland Bay stallion named Mulgrave Supreme in the 1960’s which caused the breed’s popularity with the English public to rise during that time. Despite many ups and downs in this breed’s population numbers, the Cleveland Bay Horse Society have worked tirelessly and innovatively to conserve this native breed. The Cleveland Bay is a beautiful horse with great substance, activity, stamina and a temperament.