Leader sheep are graceful and prominent in the flock, with alertness in the eyes, normally going first out of the sheep house, looking around in all directions, watching if there are any dangers in sight and walking in front of the flock when driven to or from pasture. They may even guard the flock against predators.

There are many stories about leader sheep and their ability to sense bad weather and how they lead the heard home before a storm. A book has been published with collection of these stories.

The basic coat colours of leader sheep are normally black and brown and the frequency of these colours appears to be virtually equal in the population and genes for two colours (piebald) has the frequency of 0.92.  Inbreeding in the leader sheep breed has been successfully controlled during the last few decades; inbreeding coefficient of individuals having sufficient pedigree data is 0,027.

The Leader Sheep Society of Iceland (NGO) was founded in 2000 and their priority is to improve individual recording and plan their breeding more effectively with emphasis on the wool quality.

In the front leading the heard is Flotnös Forsetadóttir, a leadersheep ewe showing her intelligense and leader sheep characteristics. 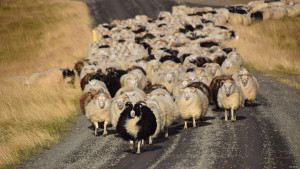