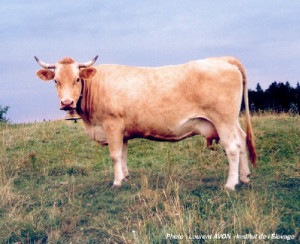 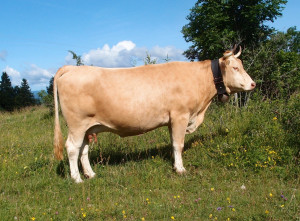 Villard-de-Lans breed is a cattle breed originated from Vercors Moutains not far from the city of Grenoble, in French Préalps. Traditionally it is a triple-purpose breed (milk, beef, work). In fact, all cows were milked and the most of them were trained up for work on the small farms. Calves were very appreciated for veal.

At the beginning of the 20th century, the number of females was around 16 000 cows.  This breed was certainly a local strain of another breed or bigger population that we could call “Comtoise” breed (with Albanaise, Bressane, Fémeline Mézine, Villard de Lans strains). This population extended on an immense territory in the 19th century before the arrival of swiss spotted or jurassic breeds : Fribourg (at the origin of Montbéliard breed) and Simmental. So, the last remnants of Villard-de-Lans breed are the last witness of this old blond population of south-east of France .

Villard-de-Lans breed was maintained in its area of origin until the end of the Fifties. Indeed, because of the desertion of bovine working, the aggressive disease prevention against tuberculosis and brucellosis and the installation of a policy of specialization of the farms, this period was fatal to this breed. During the Seventies, there only were a few dozens of purebred animals and one could fear a total extinction of the breed. In 1976, after a decision of the National Commission of Genetic Improvement to help to preserve cattle breeds and thanks to a credit of the Ministry of Agriculture the first actions of conservations started. In 1977 three purebred bulls entered in AI Center. Institut de l’Elevage ensured the technical and methodological follow-up of the breed since 1978. Today, registered population is stabilized around 400 females and 80 herds..

A little more than half of the animals are bred in suckling herds, sometimes by part-time breeders and in general, products are marketed in short circuits. The other animals are bred in dairy herds. Some herds participate to a guaranteed cheese product: AOP “Bleu du Vercors-Sassenage”. Since 2018, the specifications of this cheese indicates than each herd producing Bleu du Vercors Sassenage has to breed at least one Villard de Lans.
Breed Description

The Villard-de-Lans is a dual purpose breed well adapted to the “plateau” of its préalpic region. It’s a good grazer. The current mean size and weight of females are 1,40 m and 700 kg, and their milk production is around 3800 kg at 4,1% fat and 3,2% protein for adult cows. Calves bred with milk of their mothers are very estimated. They have good growth and very testable meat.
Previous/Future conservation action(s)

Bulls of different origins have been found and collected since 1977. Today, 27 bulls are available for animal insemination with a good genetic diversity which permits to avoid inbreeding.
Since 1980 a register of all Villard de Lans animals is recognized as the official herd- book and held by the “Institut de l’Elevage”, now in partnership with the Selection Organism “Races alpines réunies”. The breed is not easy to develop because its territory is limited. The breeders are trying  to publicize it and the new specifications of the Bleu du Vercors-Sassenage can be a good opportunity.
Contact : Herd-Book : Institut de l’Elevage, Gestion des ressources génétiques, 19 bis rue Alexandre Dumas – 80096 Amiens cedex 3 – lucie.markey@idele.fr