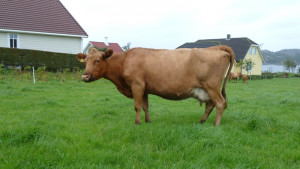 The Western Red Polled is an ancient breed of cattle originating from the South-West of Norway. The breed was established by crossing the Lyngdalsfeet cattle with the Rogaland cattle in the 1800s. Lyngdalsfeet cattle, in turn, is believed to descend from imported Jersey stocks in the 1700s. The Western Red Polled was officially acknowledged at the beginning of the early 1900s. Animals are red and polled, and limited white patches are accepted in the standard. As for many dual purposes local breeds, the switch to intensive production during the 1950s resulted in its drastic decline of the breed. Less than 200 cows are registered today which makes it a critically endangered breed, however this number grew by 25% in the last 5 years. About 30 percentage of the breed is kept as milking cows. Most animals (68% of the population) are raised for meat production which is mainly sold directly to consumers.